Originally I made these M60 style bipods for the Ruger 10/22LR Take Down rifle. A barrel band was the original mount. Then we expanded it to the standard 10/22 Carbine rifle with a barrel band mount.

Now, out of many requests. We manufactured a 22LR RIFLE BIPOD that doesn't need a barrel band. It also includes a quick disconnect knob so it fits in your rifle case. 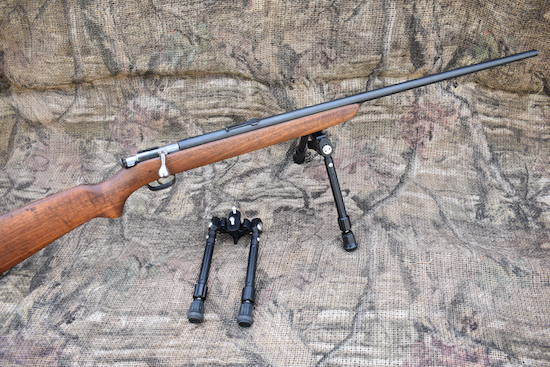 He bought it when he was 13 years old in California from a hardware store.

Boy, how times have changed. 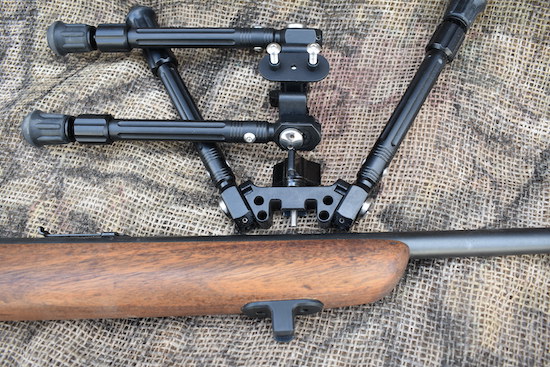 Now this takes a bit of skill to install this 22LR rifle bipod  on your non barrel band rifle stock. A few holes need to be drilled in proper location and counter bores need to drilled. Also some wood work is included depending on your rifle stock.  You will see in photo's below.

If you take your time, things will work out great.

On this page there is a blue prints of the dimensions to properly install the mount to your rifle. 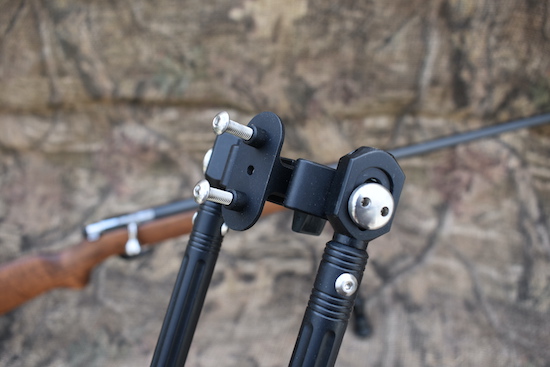 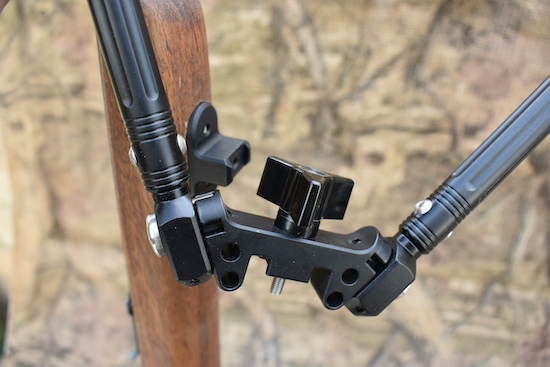 An additional quick release knob is included with this 22LR rifle bipod. The wide bridge of a M60 style bipod may not fit in your rifle case with the bipod on your rifle. This easy disconnect solves that problem. 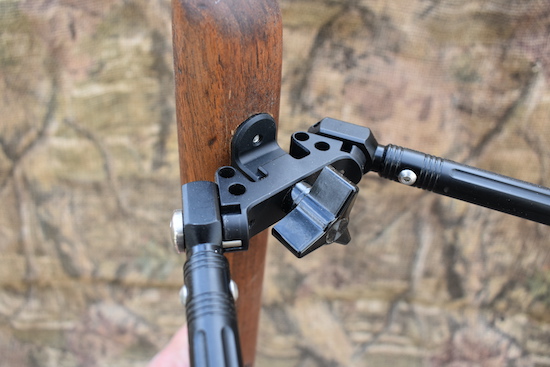 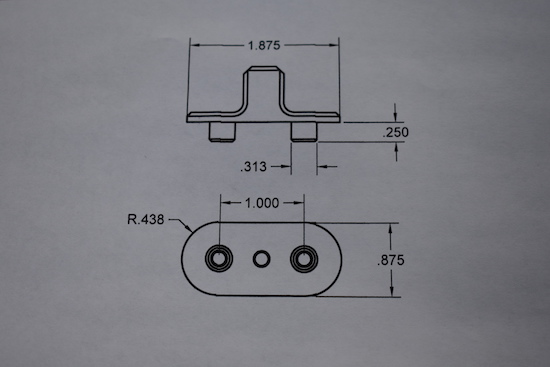 These are the numbers for the 22LR rifle stock modifications. If you have access to a Bridgeport or equivalent mill, this modification is simple. 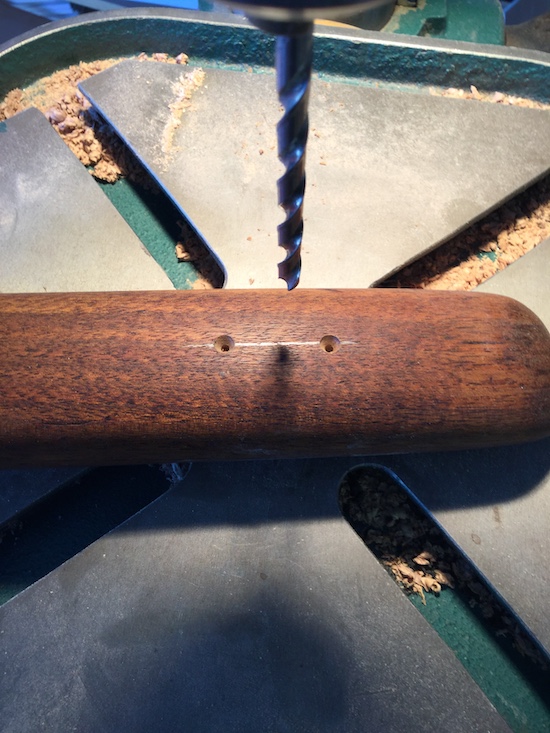 Layout a centerline in the center of your rifle stock, Holes will be 1 inch apart for the mounting lugs. I center drilled these positions in the picture above. 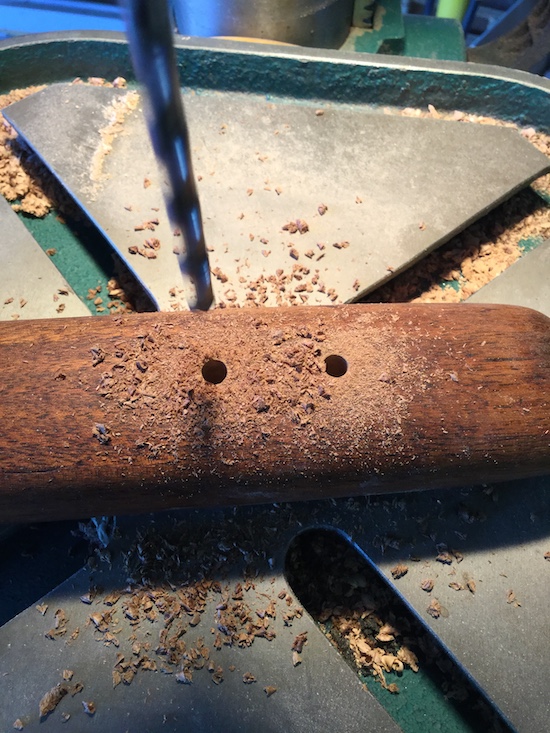 Drill both positions with a 7/32 drill thru. The screws are about .190 in body diameter. The larger 7/32- .218 drill gives a bit of clearance and deviation error. 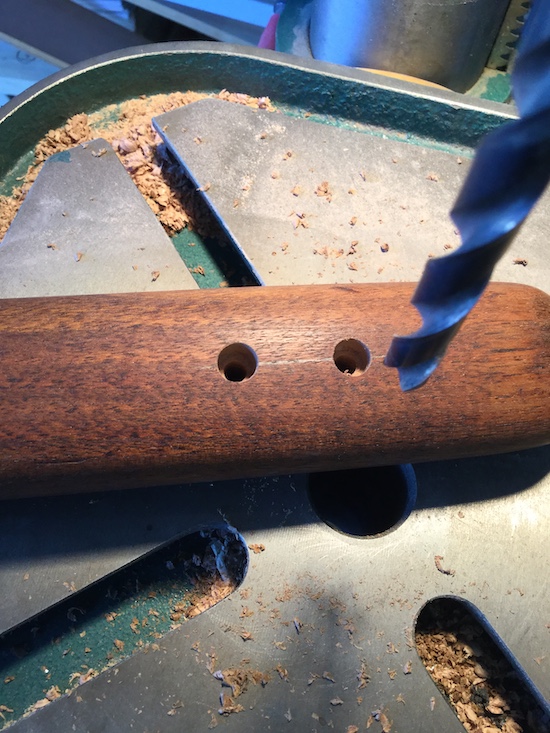 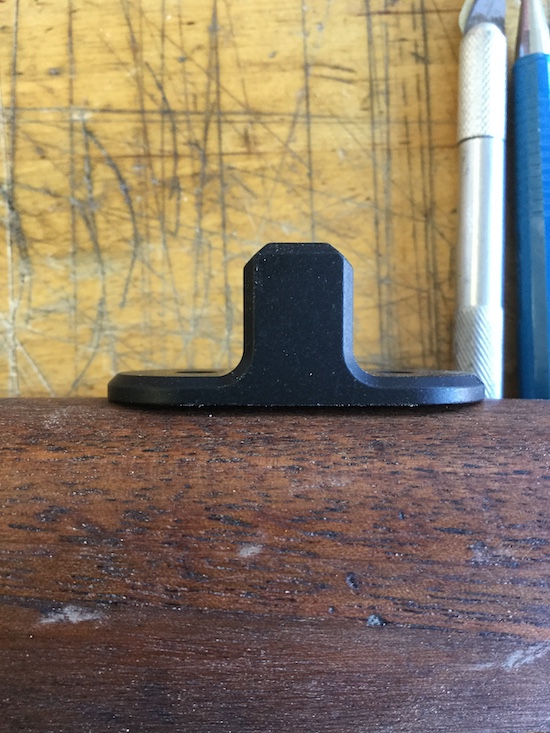 This is the mount inserted into the stock. Side photo after drilling. Now this maybe good enough for some people but.......don't think that way. 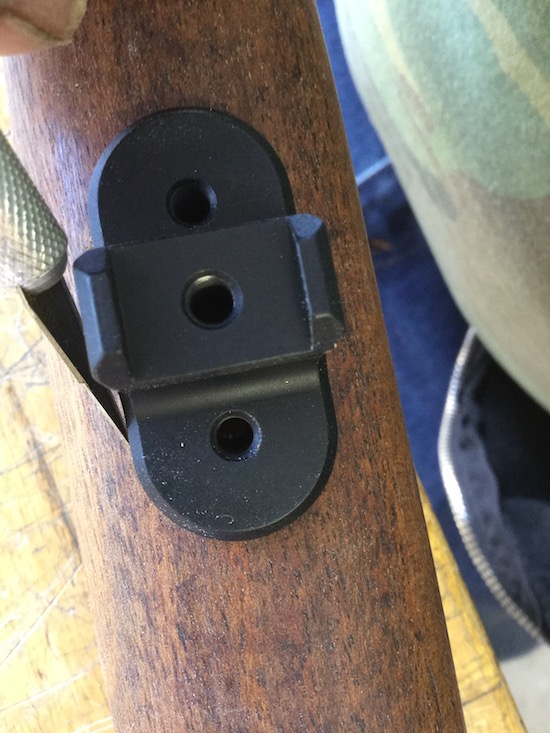 If you don't have access to a mill or a master gun smith to mount this adapter. I did this mounting old school for you guys.

Once inserted. I took this exacto  knife and scribed around the outside of the mount. 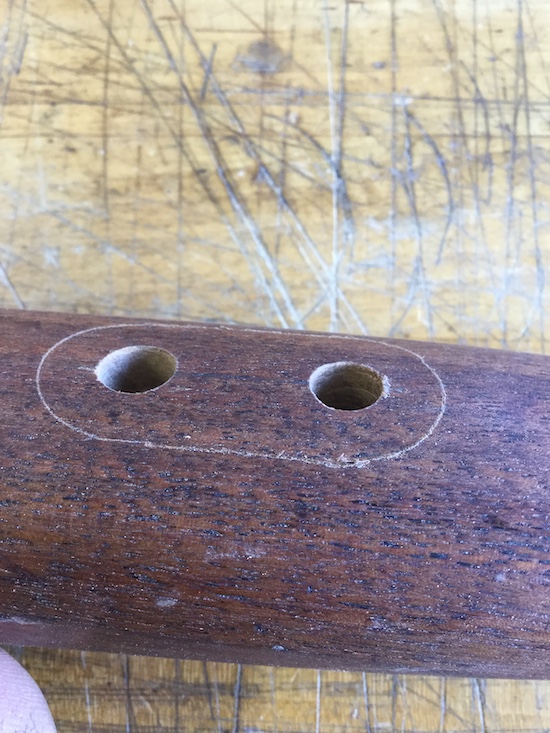 Now you have a template to carve out and mount your adapter. 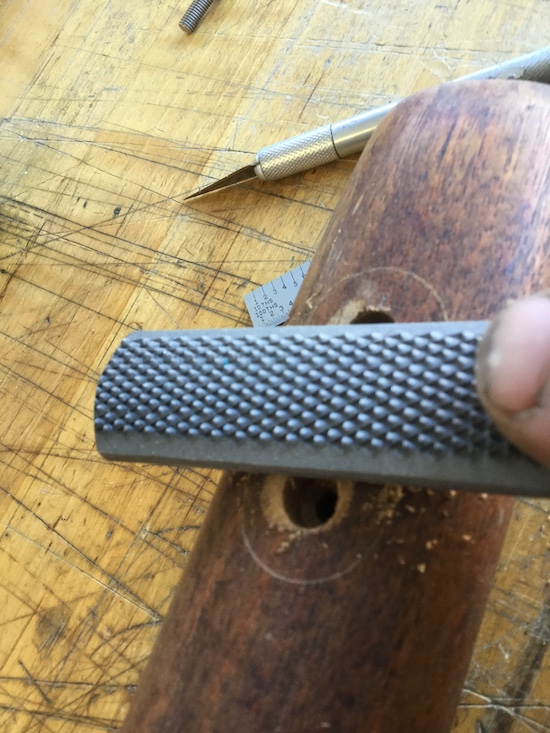 Now bench down the center of the pattern to both edges of the template. Then move on to carving out the 2 end radiuses with a the exacto knife or any carving took you have to match the benching you did with the file. 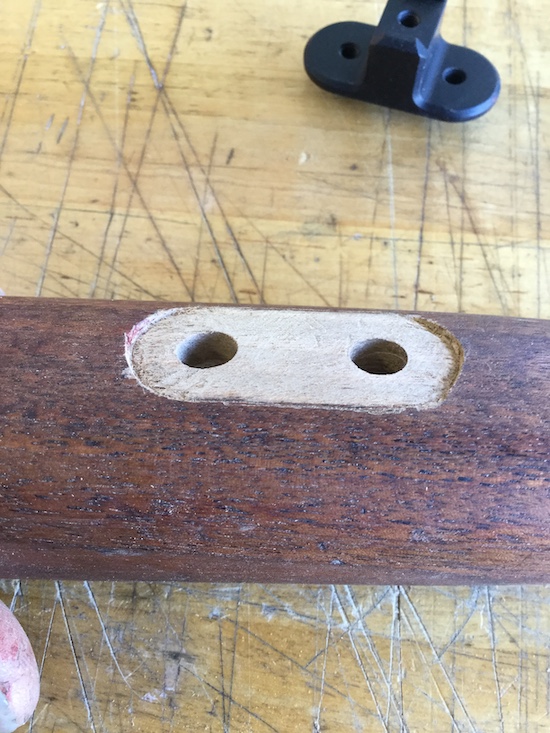 This is the result. Just take your time. I did this with a wood file and an exacto knife. It's easer than it looks. JUST TAKE YOUR TIME. 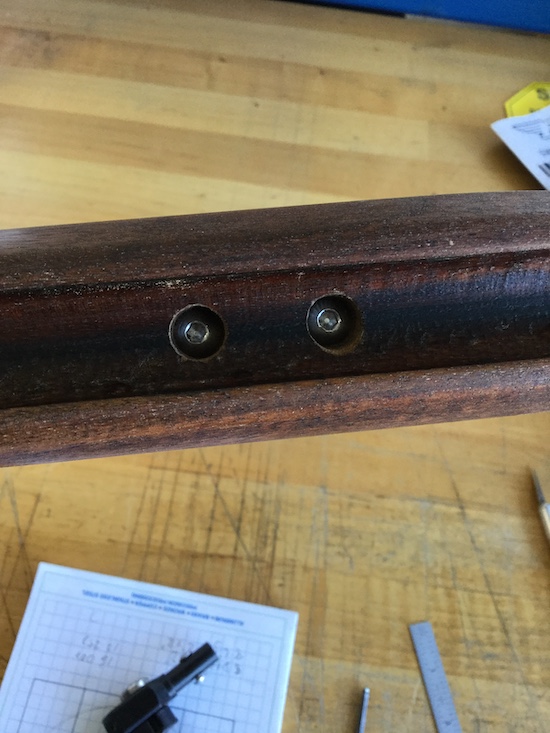 Now, to the back counter boring.

The 10-32 button head cap screws heads are a bit less than 3/8ths of an inch in diameter. 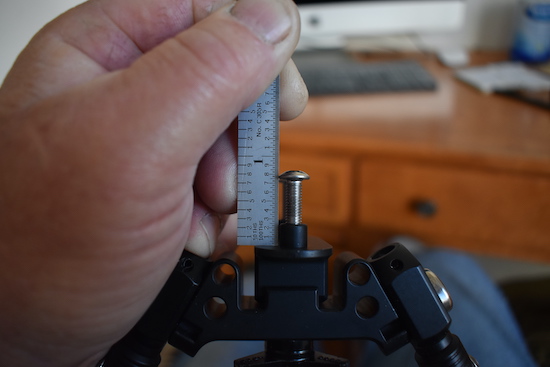 Counter bore the back side holes "3/8ths diameter" no less than the 3/4 inch distance from the mount surface that you made with your wood file and Exacto knife for a perfect installed fit. Sketch below. 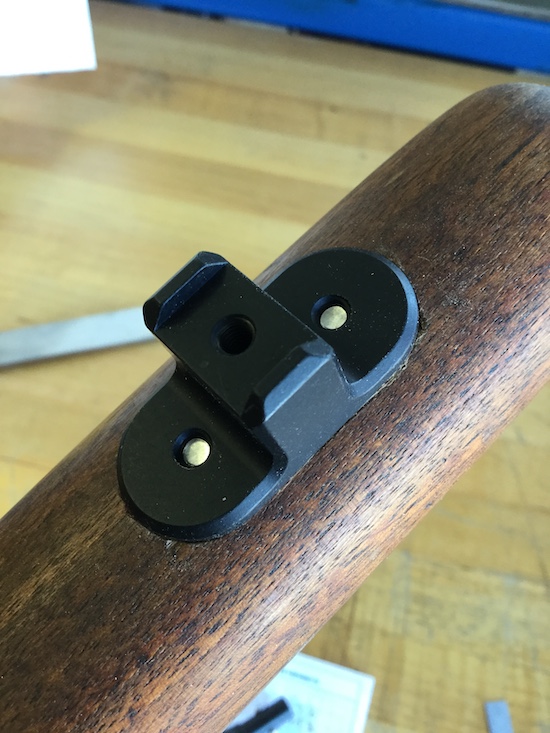 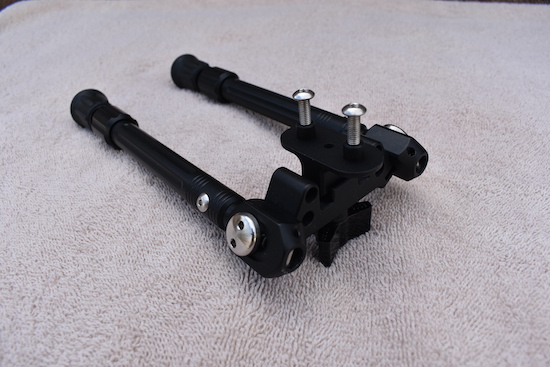